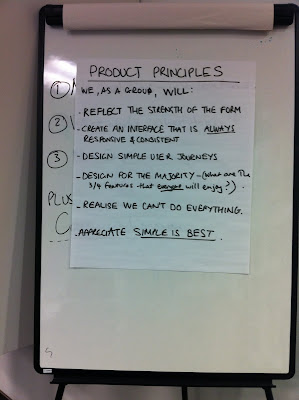 Disclaimer: After three years leading Mobile Product and Development at GNM, I no longer work for the Guardian, having departed a number of weeks prior to the iPad app launching. I am now Senior Product Manager, iOS, Skype (as of 14.10.11 Skype-Microsoft).

The Guardian iPad app is live and sits at the top of the UK AppStore. I believe it represents the start of a new and exciting journey for GNM and from the start was given the highest priority by our Editor In Chief, Alan Rusbridger. The project perhaps represents the pinnacle of my time at the company (even moreso than listening to Steve Jobs describe our previous 'Eyewitness' app is "very cool" from the stage in San Francisco) and its incarnation and evolution owes much to the Guardian's in built desire to achieve more than others dare to imagine.

The app itself represents 14 months of hard work by a small team (<10) of designers and developers. “How many iOS devs did you have?” a fellow Skype employee asked me with interest this week. “One,” I replied. He nearly fell off his chair. Sometimes it’s the quality that counts - Martin Redington take a bow. (And I do hope someone from News International is reading this, given what I know about their investment!)

The project started in September 2010 with a three day workshop in which the scope was set. This was to be the world’s most beautiful, elegant, interpretation of the print experience - with a few, added digital twists. It was also to be tied intelligently into our print production systems. That was big task – a task that we underestimated. From get-go.

Head of Design for the project, Andy Brockie, has summarised the design evolution wonderfully here , so I will, instead, concentrate on the product side and the challenges and problems that confronted us along the way.

Problem 1: Scope is the wrong scope
From the start, many senior staff had differing views about what the project should be. Indeed, at the beginning, I imagined an entirely different product. My choice would have been to develop a news app concentrating on the live, digital experience. But Alan never wavered. For him, this was an opportunity to push the ‘sit-back’, ‘long read’ more ‘considered’ news experience. It was to represent a new era for print journalism. A print-oriented product for the digital age. How right he was (and of course how wonderfully this now chimes with the device and the consumer habits that surround it).

Given the plight of all media companies, this was also an important opportunity to attempt to monetize our audience with a strong iPad news product. While our iPhone app revenues were certainly interesting (around 100k subscribers in 12 months at £4.99 minus the Apple tax), we felt this offered a new opportunity to deliver digital revenues, but only if we could offer a product that was worthy of the cost (which was set at £9.99/month after the free period ends).

To attempt that by re-packaging the Guardian's impressive (but free) website without significant editorial differences would, at best, have been crass. It was also interesting to note that our testing, again discovered a strong correlation between passionate advocates of all things digital and an absolute unwillingness to pay for news content. All too often those demanding the most from news organisations are the exact same users happy to go elsewhere when asked to donate a cup of coffee’s worth of revenue to the business. Such is the state of the media industry. Quite a challenge. Which leads me onto:

Problem 2: Are we mad? We’re cannibalizing our own audience / business
This was easy once Alan had set the direction. Ahem, Apple anyone? Rather us than someone else, surely? And print is in terminal decline, so the options really are limited. 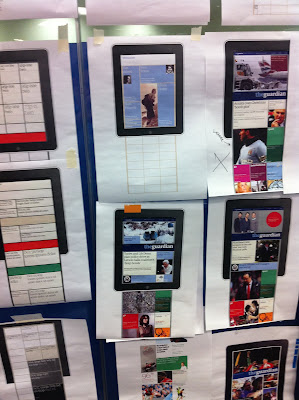 Problem 3: You’re taking WAY too long
This was unquestionably the most difficult issue throughout the project. It should also be known that this is also perfectly normal. Many senior managers don’t understand the complexity of delivering truly successful technology products (and most don’t need to). Even the team – who do and did – dramatically underestimated the amount of time it would take to integrate the new CMS into our print production systems and tools. From inception to launch the project lasted over 12 months. Given its priority internally, it became almost ‘too big to fail’. Indeed, some individuals backed away, believing it would become GNM’s very own version of Windows Vista (am I even allowed to say that now, I wonder?)

Despite the low team headcount, it was certainly regarded as a risk. We had started from the perspective that this would not be a 'me too' launch. The same team had already delivered a number of highly successful products and we felt, in the mobile space, as in so many others, GNM had a significant reputation to uphold. Brilliantly useful products with intuitive UIs are still few and far between. That’s not, in my view, because most product managers, designers and engineers are dismally poor at their jobs. But it could be because it is all too easy to buckle under the pressure of management to "deliver now". When juggling 'quality', 'scope' and 'time' it's always a difficult call - in our case, given the need to deliver an intelligent integration into print, there was only ever one solution - to postpone the launch (and of course, it now seems to have worked in GNMs favour given Apple's 'newsstand' functionality).

That decision brought a fractious response from some in the business. But it was the right one. True – GNM is late to the 'iPad news' party, but it's always been my view (given the standard of many apps) that the only thing we missed were the free drinks. The team and I truly believed that the iPad is a device unlike any other, creating as it does, more expectation on behalf of the user than any digital product in history. The need for quality was, and remains more important than ever before. 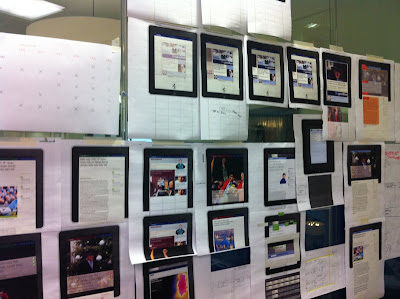 Problem 4: Team morale
On any project lasting for 12 months involving a small team and with significant pressure from above, team morale will always ebb and flow. It’s probably best for the team to conclude how successful I was, but certainly the project taught me - yet again – that promoting a positive working atmosphere is one of - if not the - most critical part of a product leader’s role. Indeed, I believe that alone can have one of the most advantageous effects on the eventual shipped product. 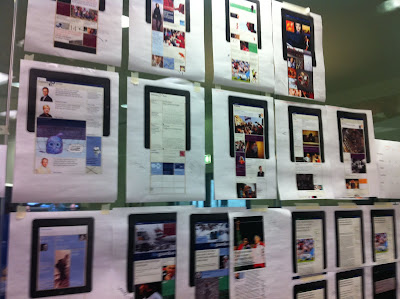 PROBLEM 5: Missing (critical) roles
We had no formal project manager or scrummaster roles and no standalone technical lead. This is by no means new at media organisations. The first two (yes, epic fail) were picked up by myself as product manager, while the tech leadership was widely shared by the team. If I had to revisit this project (any project!) again, I would demand both up front immediately. That’s happening already at GNM where they are implementing a new structure and process that will certainly hold them in good stead as they forge forwards with their digital strategy.

Conclusion: It is of course for the users to decide, but initial reactions do look positive (given the 4.5 star AppStore rating and the #1 spot). How that translates into subscriptions remains to be seen, but I do believe the product is of sufficient quality to help GNM create a valuable new revenue stream. The 'big bang' nature of the launch was a risk. But the AppStore is a different beast to most. 'Suck once' and you really do 'suck forever'. Then again - the real work really does start now.
Posted by JJ at 22:07

Good work, Jonathon. The app looks great! It's amazing how much your team sounds like a startup.

I wrote up some tentative first impressions on my own blog (as part of a more broadly based piece). Am still digesting 'the experience' so it's good to have an inkling of the background to the development.

Really enjoyed reading this so thanks for posting.

It's amazing how often I've had to balance delivering a quality product against management calls to 'just get it out the door'. Or their ideas about how things should done that fly in the face of good web practice.

I try not to buckle but I think it's getting harder if anything - print media is facing a perfect storm and the pressure to launch something... anything is really on.

Well done to you for delivering. The app looks great and works really well. For the record, I'd have done a live news/ comment app myself - something for the future?

The app is great but I think the £9.99 pcm price point is too high. I'm not sure the commercials on this are right. I'm enjoying my sponsored trial and will have to reconsider when that expires.

The Guardian iPad app is certainly well designed - looks good, UI is pretty good and good use of images and layout.

However, I am still amazed that all these publishers who supposedly 'get' why the iPad is so great to use don't allow it to be the same within their newspaper/magazine apps.

Having text in a fixed size is of the past - that's what one had to put up with in print. In digital there should be no such restriction and, indeed there is none when viewing web pages on the iPad.

That means accessing the Guardian web pages via the iPad is a far better experience than using the app.

Add to that the fact that the content on the website is more up to date and that there is far more of it (whole sections missing from the app - technology anyone?) and the ability to read and add comments and it's sadly bound to fail.

GNM are asking people to pay £10 a month for less than they can get for free - but nicely laid out. As big a fan of good design as I am, I'm afraid I won't be subscribing. I deleted the app when I wanted to read opinions on the Rugby world cup semi-final 10 hours after the match and the app still contained previews.

The content is a bit sparse in some areas though but I am sure that will grow over time.

JJ
"To do a dull thing with style-now that's what I call art." -- Charles Bukowski

Get My blog on Mobile via Mippin